Guess what? Last Sunday we got eleven inches of snow, AHHHHH! Since church was canceled and it was Mom’s birthday, we just stayed home and had possibly the best snow day ever. IT WAS MARVELOUS. I took heaps and piles of snow pictures, and I can’t wait to show you a selection of my favorites! 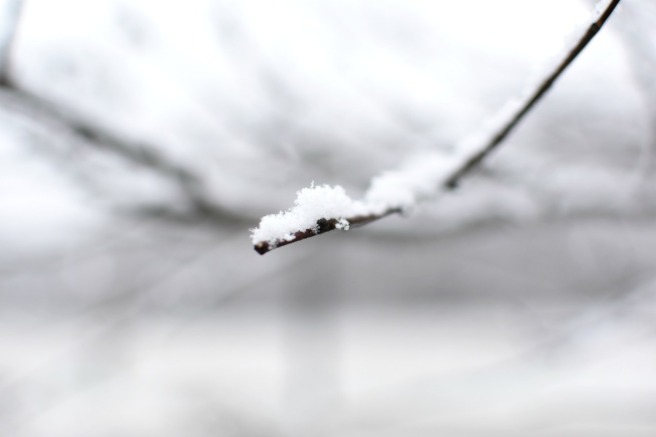 These next two photos are probably the pictures I’m most proud of. ❤  Before breakfast on Sunday, I used my macro lens extension tube kit (see it here) and a black glove to take these snowflake pictures. I took a BUNCH that didn’t turn out, but here are a couple that did! Isn’t the intricacy STUNNING? 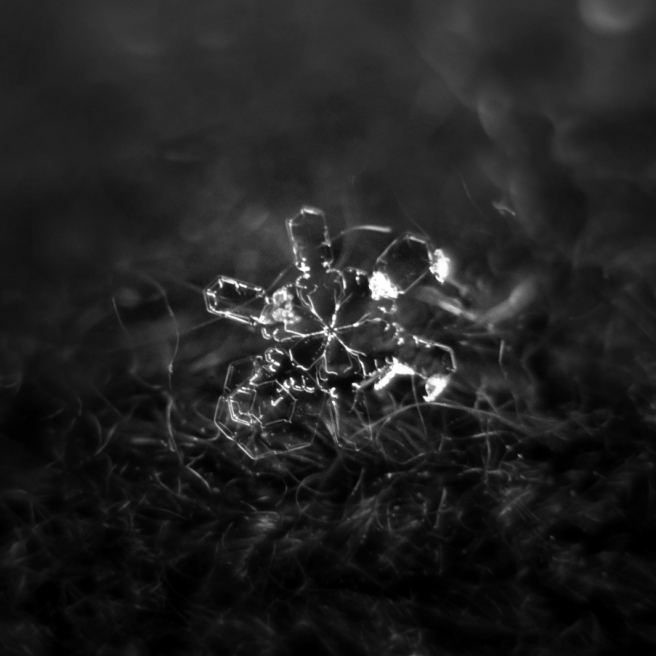 I combined two angles of this snowflake into one picture to make it (a bit) sharper. I like the typically feathery and gorgeous shape. It astounds me what incredible beauty and design God has worked into even the tiniest pieces of our life!

After Mom’s birthday breakfast, we sang some Christmas carols while I played piano, made snow cream (yum), and then decided to take a picture for our Christmas card. Except it was snowing so hard you could hardly see our faces. XD It worked better with Megan and Eeyore, though Eeyore doesn’t seem too impressed. I love this picture, don’t you? 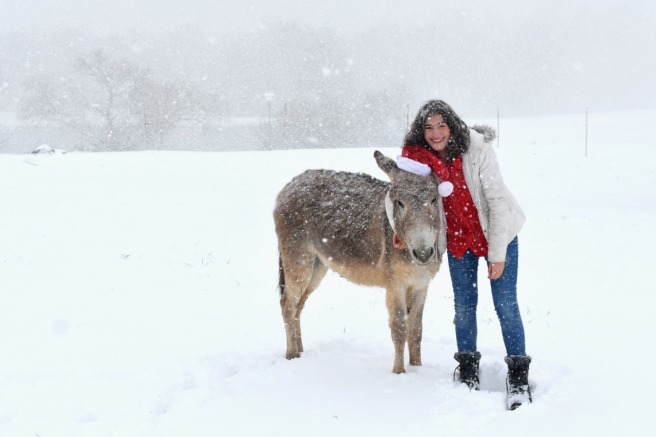 We went inside to recover for a while after that. 😛 In the afternoon we pulled on all our snow gear and braved the cold again to go sledding and take a walk by the big hay barn. Guys, LOOK AT ALL THAT SNOW! It wasn’t a blizzard, but it was snowing awfully hard!

Heh heh, Megan’s outfit… XD (Also those tires were in one of the barns when we moved here, but we took them out when Dad converted it a shop.)

Sledding is extra fun for us since we don’t have to walk back up the hill. 😛 Who needs to  walk when you have a Mule (that thing with wheels, not Megan’s donkey)?

I must keep up the tradition and post pictures of these delicious doughnuts like I did last time, right? Fun fact: it snowed on the exact same day last year, when we came down and spent the night at our new farm for the first time on Mom’s birthday. See the post here.

Instead of sledding, Mom, Dad, and I took a walk through the woods. Oh my goodness, it was MAGICAL. Truly a winter wonderland.

I made sure to walk behind my parents so I could get some pictures of them, hee hee.

They were trying to find the prettiest snowflakes on their gloves here. 🙂

This is the only one of them that’s not candid, but I love it all the same! ❤ 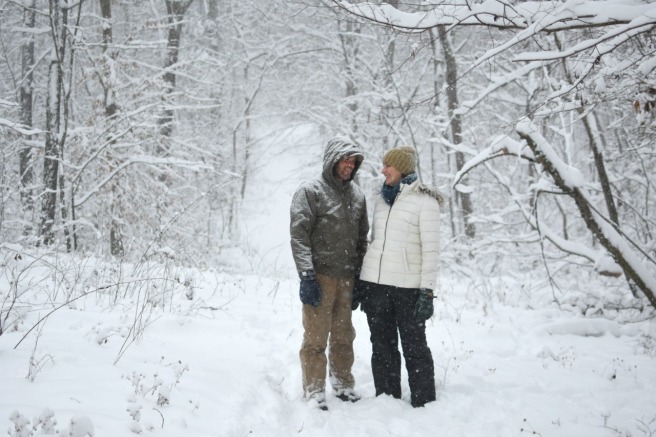 Mom offered to take a picture of me too, so I let her. 😉

After the walk, I took some more pictures. (SHOCKING!) I have no idea what this random bale was doing outside, but it made for a good picture. (Don’t worry, we usually store our bales safely in a barn. 😛 )

I was elated to find this… machine outside the shop. I don’t actually know what it is, but IT’S SUCH A PRETTY COLOR. And looks even better in the snow! Plus, this photo is #nofilter. 😉 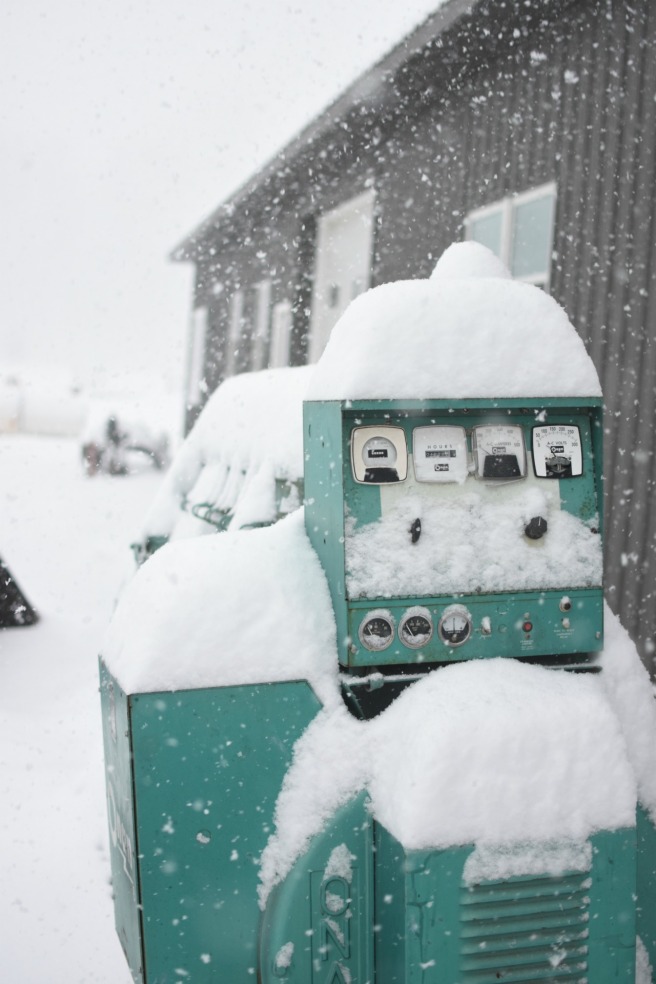 It’s interesting that God has given humans the power to build fascinating and intricate things too. This teal machine isn’t quite as awe-inspiring as snowflakes, but still – it makes sense that man was made in God’s image when you see our ability to create. 🙂

Here’s an abstract black and white for you. This doughnut (I mean tire) is party sized, I’d say. Come with an appetite and a couple of sweet teeth. 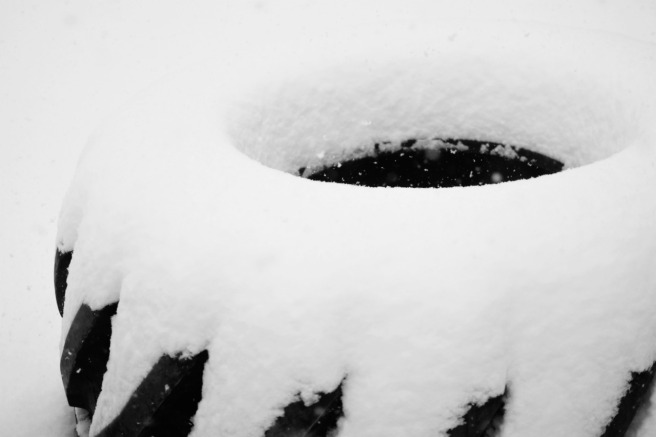 I love this picture for some reason. It looks so soft and quiet and magical and snowy and full of wonder – just like a snow day. 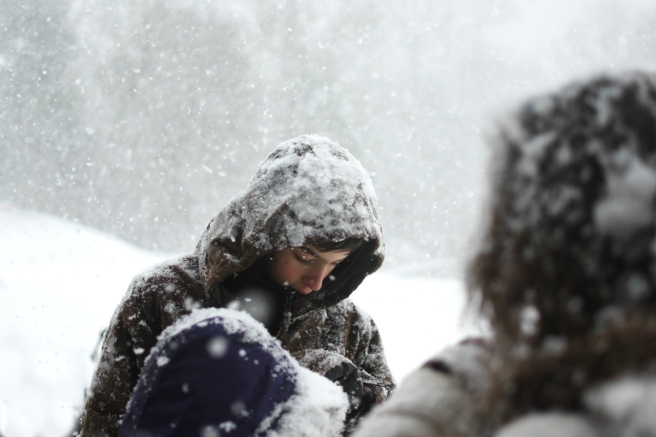 Maggie again. Isn’t she adorable? She blithely waded through the snow to follow us around wherever we went. Such a loyal pup. ❤ 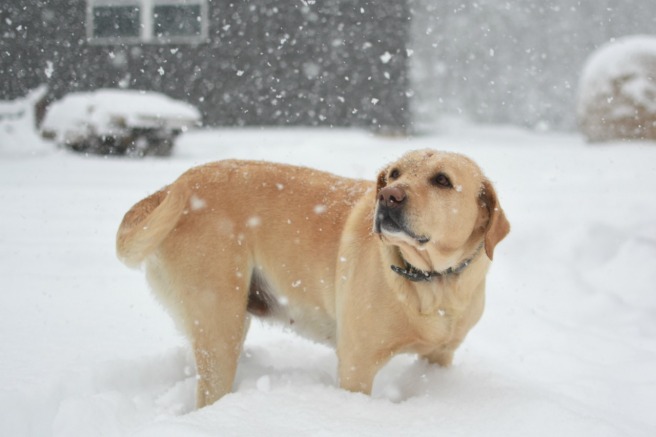 I think it’s neat how the falling snow basically only shows up in the darkest parts of this picture. By this point we’d been outside for quite a while, so we loaded up into the Mule and the red truck to go back inside for some… 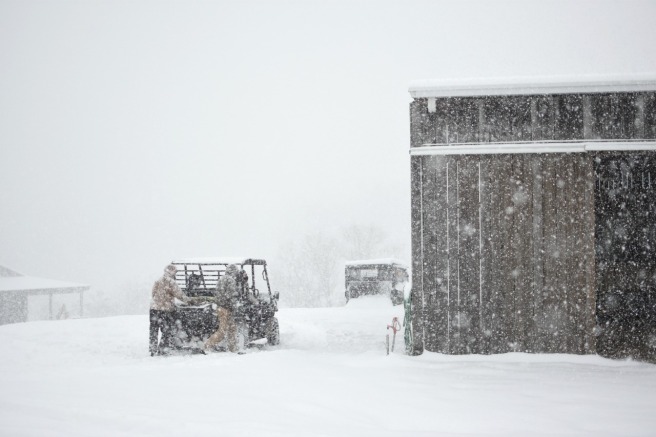 You guessed it! Hot chocolate. This is a very cliche photo, but cliche for a reason, I guess – it’s so pretty and cozy. That bokeh is our Christmas tree in the background, which I can’t wait to show you in a later post! 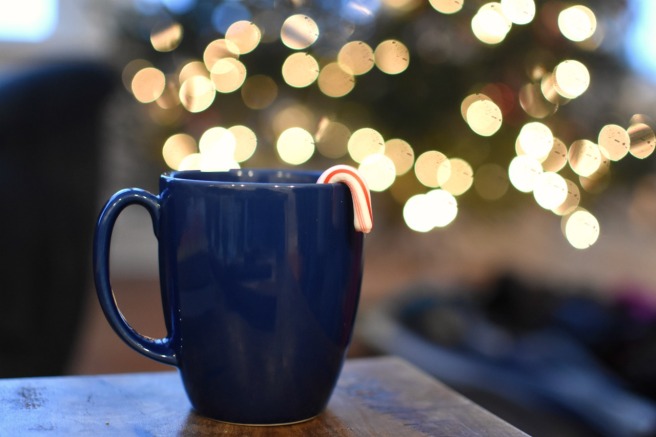 So we were sitting by the fire, drying off, when Megan suddenly got the urge to burn her sock. O.o :’D Don’t worry – it had a huge hole in it and she should have thrown it away before, so it wasn’t any great loss. And it burned surprisingly well. *shrugs* XD XD

That’s about it for the first day! We mostly just played games and watched a movie after that. But the next day when it stopped snowing, I got some more pictures, including better ones for our Christmas card. 🙂 While everyone was getting ready, I tromped around the yard and got some house pictures. I love how our white house looks in the white snow.

Now for family pictures! We decided to line up across a pretty path according to height, but… heh, we’re kinda all the same height except Carmen. Our faces aren’t as well-lit as I could have hoped, but WOW, we’re all smiling and no one looks (that) weird! Pretty amazing. XD In fact, Jeff was like, “How is Carmen’s smile so perfect in this one??” XD Isn’t it though? (Carmen is my youngest sister on the far right.)

We took a couple more pictures in different locations, like in front of the lamp post. LOOK, WE’RE IN NARNIA! I finally convinced my family to come through the wardrobe with me.

Okay, nearly done. This is day three, and I promise I’ll stop there. Mom and I joined a few of my siblings in sledding down one of the pasture hills that day. The track was getting super muddy, though, so we stopped after a few tries and decided to make a snowman instead. Or… throw snow at each other, apparently. XD (Also isn’t Jeff’s toboggan just smashing?)

The snow was too powdery to just roll it down the hill, so we laboriously slapped on handfuls at a time. Since Megan, Jeff, Allison (me), and Carmen worked on it, we decided to name our snowman with our initials. That proved difficult, but eventually we decided on “Jack-with-a-silent-M,” a.k.a “Mjac” or “Jacm.” (The placement of the M is still controversial.) That name still cracks me up. :’D Here’s one completed snowball…

We wanted to build the snowman by our front entrance, so Jeff scooped up snowball #1 in the telehandler bucket and drove to the gate. I thought the light was so pretty, shining on the chunks of icy snow. It almost looks like the pieces are glowing.

Then one of us (I think Megan) had the brilliant idea to put the snowman on top of the post! :’D So we created a head (but no “abdomen,” as Carmen called it), and carefully stacked the two pieces. 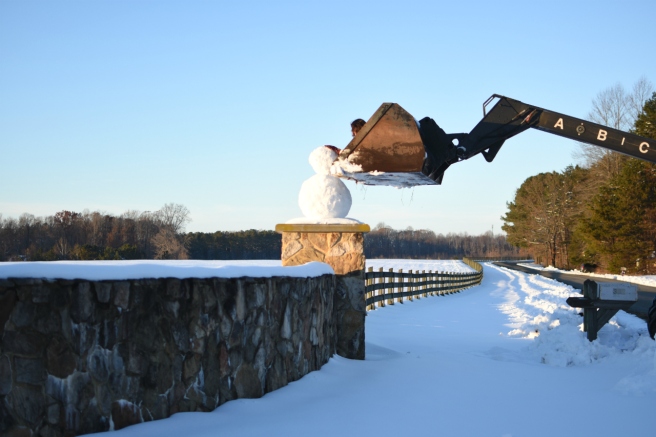 Then all we had to do was add the finishing touches with two branches, two rocks, and a carrot which Maggie bit the tip off of, and VOILA! Jack-with-a-silent-m was complete! Isn’t he a masterpiece? *applauds*

By this point we were all soaked, freezing, and worn out, so we headed back up the lane to the house. Jeff wondered if I wanted to get some pictures “from above” by him lifting me in the telehandler bucket, so I agreed. Megan and Carmen decided to accompany me. 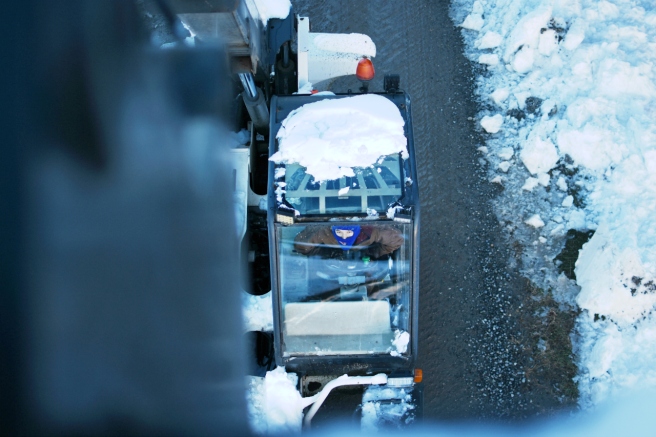 The pictures actually weren’t that impressive, but this one is kind of neat. 🙂 This shed has a lot of history, but kind of mystery history… XD

NOW THE FOR THE BEST PART. After I took a couple pictures, we yelled to Jeff that he could put us down now. The telehandler started churning away, but we didn’t really seem to be descending… Megan was like, “What if we got stuck up here?” O.o And just then, Jeff was like, “Uh, guys… it’s not working.”

Megan and Carmen weren’t too pleased, but I thought it was HILARIOUS. I suggested Jeff try turning it off and on again, so he did and it started working! But then stopped again. He kept repeating that until we finally reached the ground. Phew! It would have been pretty bad if we’d actually been stuck, since none of the rest of our equipment can reach as high as the telehandler. But all’s well that ends well, I suppose. 🙂

And on that note, I shall wrap up this post. Hopefully you enjoyed the snowy pictures and reading about our adventures. 🙂 I’d love to hear which pictures were your favorite, and if you guys had any snow days recently too. Also, what is your favorite thing to do with snow?

77 thoughts on “Walking in a Winter Wonderland {Snow Photography}”