(See the first installment in this series here.)  Today we’ll look at some ideas for the spaces on the board, as well as cards and spinners for your game.  Definitely change the symbols and graphics if you want to, and uh… be sure to make your spaces and board neater than I did here! ☺

This is a fun little space I call a “spring space.”  When you land on it, you get to move your playing piece ahead to the next spring space.

If your board game has cards, you can make spaces where you pick up a card when you land there.  Just draw a square with the graphic on the back of your cards inside it.  (You’ll probably want to make a more interesting graphic than my boring ol’ “T.” ☻) 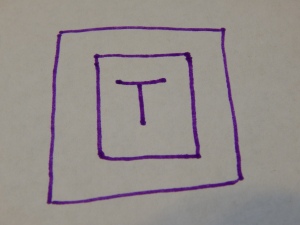 It’s fun to have money, coins, or tokens in a board game.  They can be the point of the game (whoever gets the most by the end of the game wins), you can buy something with them to help you, whatever!  You can have a specific way to earn coins, or have coin spaces on the board.

A board game can’t have only good spaces – it needs some suspense!  One “bad” space is a go-backwards space.  Write how many spaces you’re supposed to go back on top of an arrow pointing backwards.

You can either have the player jump to the other end of the shortcut all at once, or divide it into spaces so that they still have to roll their way across. 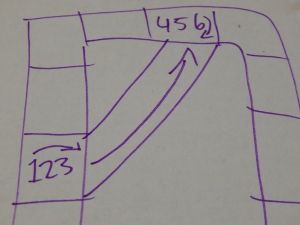 Pit (which makes you lose something like a coin or a turn.)

Now for cards.  I can’t really help you much here, because the kind of cards you make really depends on your game.  They could make you answer a question or do a certain thing in order to move ahead on the board, they could be superpowers to help you, they could be anything!  But as for making the actual cards, I think the best way is to either cut them out of cardstock with a paper cutter, or print them onto cardstock from your computer.  The nice thing about printing them is that you can design a nice graphic that will look the same on all of your cards.

You can make a spinner by printing out a pie graph divided evenly into the number of spaces you need, and pasting it cardboard.  An alternative to printing a spinner is drawing one.  Cut a square piece of cardboard and divide it evenly into the number of spaces you need.  Trace a circle onto the square, and cut it out.  For the spinner, cut a rectangle that comes to a point like an arrow at the end from cardboard.  Punch hole in the middle of the arrow and the spinner-board.  Put a brass-brad through the hole, but be sure to leave some room between the head of the brad and the arrow.

Whew, that was a long post!  Hopefully it helps if you ever want to make your own game.

6 thoughts on “Make Your Own Game! Part 2: Spinners, Spaces and Cards”