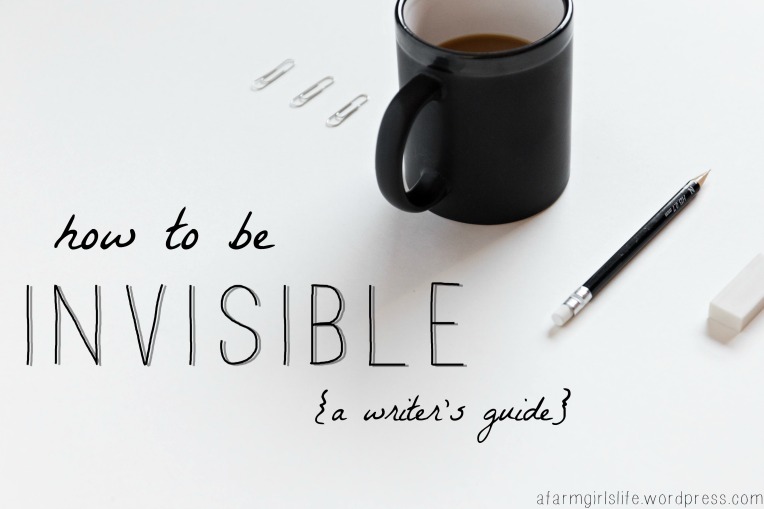 With NaNoWriMo coming up, I thought this would be a great time to post some writing tips and tricks! 🙂 Of course I’m certainly not a professional writer, and I make these very same mistakes all the time. I’m simply sharing some tips and suggestions that I hope will help you and me to improve our writing. 🙂 (BE WARNED: This is a veeery long post! XD )

The “how to be invisible” part of my title comes from this essay I wrote for school. I’ve added a few notes, but otherwise pretty much left it as it is. I’ll probably refer to this in the rest of the post.

How to Be Invisible: A Writer’s Guide to More Natural Storytelling

You’re absorbed in a story when an awkward phrase or a misplaced word brings you up short. Was that a mistake, or did you just skip a sentence? Now you have to back up, get a head start, and read the passage all over again. The author has spoiled the paragraph by coming out of hiding, by becoming too “visible.” The best authors are masters of invisibility.

What do I mean by “invisibility?” Simply this: a good author allows the story to take the stage; he avoids self-conscious, unnatural words that highlight his voice instead of his characters’. The reader should be able to immerse himself in a book without being distracted by a misplaced word, a grammar error, or a clumsy sentence.

How does one become invisible? These three tips will get you started.

Technical errors like grammar mistakes, misspelled words, and faulty punctuation are widely recognized as mistakes – and for a good reason. Even a subtle misspelling will throw the reader off. Indeed, using a real but misplaced word is sometimes more arresting than an obvious typo. “Defiantly” instead of “definitely,” “aloud,” instead of “allowed,” “breath” instead of “breathe”… Do these look familiar?

Sometimes you can achieve invisibility in more subtle ways. “Said” and its alternatives are a good example of this. On the one hand, if you use “said” all the time, your dialogue drags, but on the other hand, using anything but “said” makes your dialogue sound unnatural. [I’ve especially noticed the second option in blogging world. 😀 ] Both styles bring the author to the front instead of the characters. Let’s take the former error first:

“Then do I have to break out the tickling squad?” he said.

Jane backed away. “You don’t,” she said.

“Jane,” he exclaimed fiercely, “I am going to win this argument if it kills me!”

“You won’t,” she replied calmly.

“Then do I have to break out the tickling squad?” he queried threateningly.

Jane backed away. “You don’t,” she murmured.

Still no good. The writer has tried to avoid “said” at all costs, resulting in an affected and adverb-ridden conversation. So how do we strike a balance? The solution is to use both options. Don’t be afraid to use “said” once in a while – it provides some white-space for the reader. But be sure to add dynamic verbs and gerund phrases as well, as long as you don’t overload them with adverbs.

A third common error is using too many adjectives, particularly in opening sentences: [Again, I often see this in blogging world. 😉 I tend to do this too. It’s just so tempting to describe with all of those luscious words! But that can lead to…]

“She brushed her luxurious, raven black hair from her delicate face with a  slender hand, and pulled the thin gray sweater close around her shivering body. Her steel blue eyes anxiously searched the clouded gray sky for something that would never return…” All those adjectives clutter up the sentences and make them sound unnatural. Instead of hearing the character’s voice, you hear the author self-consciously spouting forth flowery language.

How do you fix this? The best idea is to scatter these description throughout the opening paragraphs, or even pages.  You don’t have to exhaustively describe your character or the setting in the first sentence. [GASP! I know, right?] Let the reader get to know your character gradually, feeding them bite- sized descriptive tidbits instead of forcing down a whole chunk at once.

Becoming an invisible author isn’t easy, but it can be done. Scour your writing for any grammatical mistakes or awkward style formations that push you and your writing to the front instead of your characters. With a critical eye and some practice, your readers won’t even know you’re there.

So basically what I mean by invisibility is writing your story naturally, so your readers will hear your character’s voice instead of yours. Here are a few other tips for invisibility. 🙂

I often struggle with this because it’s so easy to find a rhythm and use the same pattern. Maybe you write in short declarative sentences or two-clause sentences, or really loooong sentences. Whatever you always do, don’t. Sentence variation saves the reader from monotony and death-from-boredom. In general, I like to use two or three clause sentences for the most part, scatter long sentences occasionally, and use short declarative sentences for emphasis. Don’t underestimate the power of a well-placed short sentence! It stops you cold. (See there?)

It’s amazing how many words you can prune from a piece of writing. I’m reading William Zinsser’s On Writing Well for school, and he suggests using brackets to burn through clutter. Put brackets around all words, sentences, and even paragraphs that seem unnecessary, then read through your story again, skipping over the bracketed sections. You can always keep the bracketed words if your story needs them, but you might be surprised at how many words you can clip away! Don’t save a word merely for its sophisticated sound.

Make sure to keep a consistent tone throughout your book. Yeah yeah, everyone knows that. But seriously, it’s a very important part of invisibility! 😛 Let me give you a few examples of what I mean.

Tone can be especially tricky in first person POV. Your main character is telling the story, so make sure it’s natural. (I definitely have trouble with this myself.) If you were the narrator, would you describe yourself as having “luxurious raven black hair”, to use our previous example? Depending on your character’s personality, you might, but personally I would feel rather awkward saying that. XD (Plus it’s not true – as you can see from my profile picture. XD ) It’s too poetic – it fits better in third person POV when you as the author are more removed from the story, and talking of a person other than yourself.

Another thing to watch for is the tone of individual words. If your story has a more serious tone or is set in a timeless or older setting, using modern words like wacky, fake, weirdo, etc. will temporarily destroy the mood you’ve created for the reader. This also goes for materials and objects. If your character lives in a Medieval-Age world where they fight with bow-and-arrows, ride horses, and live in thatched houses, please don’t use modern inventions like plastic, computers, or paved highways (that is, unless your setting is only partly Medieval). Nope, not a good idea.

Redundant Words: If your character is holding a knife, you don’t need to say that it’s “sharp” unless you have previously told the reader otherwise. If your character feels like dancing in the rain, don’t describe the experience as “wet.” Unless the reader is a hermit who lives in a desert and thinks “knife” is that bug that keeps crawling into their bed at night, they can figure out that information on their own. 😉

“Several minutes:” I’ve probably used this several times in my writing, but if you really think about it, this phrase doesn’t make sense. If you met someone and “we stared at each other fearfully for a few minutes,” that would be extremely awkward. Most of the time you should change this phrase to “several moments” or “a few moments.”

Two-clause “and” sentences: I learned this helpful little tip in grammar a few years ago. If you have a two-part sentence where the subject doesn’t change and where the two clauses are connected by the word “and,” you don’t need to separate them with a comma. Okay, that was kind of confusing, so let me give you an example.

Wrong: John eagerly nodded his head, and gave her a brilliant smile.

Right: John eagerly nodded his head and gave her a brilliant smile.

Phew! That was a loooong post! But I hope that was helpful, at least a little bit! Do you have any writing tips?

68 thoughts on “How to Be Invisible: a Writer’s Guide”