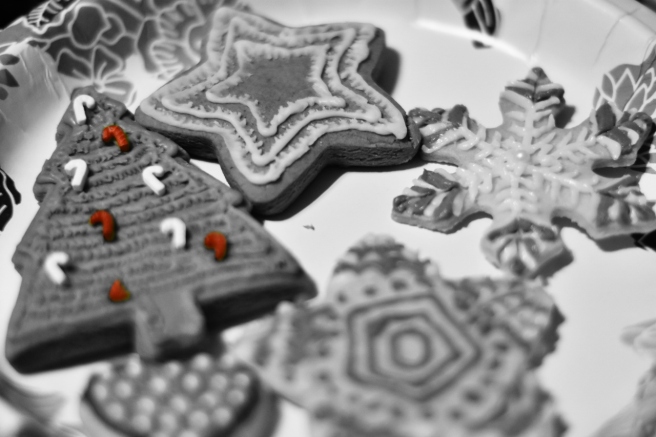 The journey was long, but we were strong.

“Our finest gifts we bring… to lay before the King.”

Blankets and wool against the cool.

Kneel down, creaking sounds; bow low, down we go.

But then I remembered what the angels said, and a thrill of fear pierced me again at the thought of their thundering voices and blindingly bright faces, faces that had seen God Himself and yet deigned to appear to us, the lowest of the low. Shepherds. They had said, “You will find a baby wrapped in cloths and lying in a manger,” and at the thought, they had been filled with such ecstasy that they poured out the most beautiful and terrible song I had ever heard, with a thundering, pulsing beat that made my heart ache in reply. And they were right. There you were, sleeping among the stiff rags and coarse hay.

Remembering this, I knelt – out of obedience at first. But when you opened your eyes and looked straight into mine, I knew that you were no ordinary King: you were our Messiah, our Savior, the long awaited perfect Lamb, better than any unblemished sheep we raised for the temple. For in your new-opened eyes I saw the wisdom of eternity, and a love more beautiful and terrible than the song of the angels. Love for me, a lowly shepherd boy, a little drummer.

I longed to give you a gift then, a gift worthy of such a King. But I had nothing.

Little Baby,
I am a poor boy too.
I have no gift to bring
That’s fit to give the King.

I looked down at my feet in shame and there was my drum. The only thing I possessed. It would not do much good to give it to you, but maybe… I raised my eyes humbly to your mother who was watching you with worship on her calm and tired face. I asked her if I could play for you. My father held out a hand to stop me, but your mother smiled and nodded.

The night was silent then. Silent but for the rhythms in my memory, the precious stones I had collected on our journey until I had a chance to drop them one by one onto my drum. Now I let them go.

The song was gaining strength, but it was still hungry. I fed it more rhythms, dropped more stones: The heartbeat quickened and pounded as the angels appeared, then the tempo scattered and broke into the complicated, powerful roll of the angels’ hymn that had nearly ripped my heart out when I listened. Finally the heartbeat slowed again, accompanied by the slap of our footsteps traveling to meet you. And then everything sped up and crashed together at the moment when you looked at me and I saw a Redeemer in your eyes.

I thought I was finished, but the rhythm took hold of me and I played a song I did not know, a song I had never learned. The staccato tempo of the donkey’s feet carrying your mother here. The cries of pain as she brought joy into the world. The first breath of a new life and yet a life that had always been. The sound of a thousand thousand hearts beating in unison, aching with longing for a King, a Savior to heal up the cracks where sin seeps through. And the shivering bleat of a perfect, unblemished little lamb who held deep power inside.

The song swelled and grew as I added each new rhythm, flying upwards and outwards until it blended with the billowing, whirling wind outside. The pulses crept under my closed eyelids and traveled with a delicious tingle down my cheeks and into my mouth, where they piled so high that the corners of my lips stretched up to hold them all. Still they kept seeping in until at last they overflowed and burst out my mouth in a jumble.

The laugh bounced off the drum with the rest of the precious stones, then followed them over the side, single file, until the only stone left was the soft, deep thump of my heartbeat. At last, it too danced off the drum and the world was silent once again. I sighed, satisfied, my gift completed.

I opened my eyes and looked at you. And you smiled at me.

Well, that was fun! Maybe not the best thing I’ve written, but something I’ve been wanting to write for a while. I know, I just posted a Christmas story… sorry ’bout that.

(I promise I will cut down on the writing and Christmas-themed posts and get back to normal after December. XD)

But I just love the Little Drummer Boy song. It’s such a sweet and powerful reminder that we, too, have nothing fit to give our King – and yet he laid down his life for us. Though we crown him with thorns, yet he smiles at us. The least we can do is play our life song to him in gratitude. ♥

Thank you for reading, and I hope you enjoyed the little story and Christmasy pictures. 🙂 And MERRY CHRISTMAS, GUYS! I hope you have an absolutely stupendous one. ♥