A little while ago, I took a walk in the woods which I will never forget. I found a trail of mushrooms leading me into the forest, where I found more mushrooms with more variety than I have EVER seen before! I can’t wait to tell you that story and show you some of my favorite pictures. But before that, let me announce the winner of the giveaway so you guys can read in peace. 😉

Thank you SO much for entering my giveaway, guys! There were almost 40 participants, yay! Also, I absolutely loved reading your envelope art suggestions, and I’m working on adding new envelopes to the shop right now, starting with a book-themed set. 🙂

But ANYWAY, back to the winner. LET’S SEE WHO IT IS.

Athaleyah Wolf! Congratulations, girl! I’ll email you shortly to send your the details and your free printable, and I’ll try and ship your goodies off soon! 😀 Thank you again for participating, guys. If you want to buy the things from the giveaway yourself, you can find the sealing wax and washi tape on Amazon, and most of the rest of the items at my Etsy shop, The Color Box Studio. 😉

Now, for the actual post. *rubs hands* Sit back and enjoy! 🙂 A couple of weeks ago, I went for a walk to see if I could find any bits of fall. I wasn’t too successful, but I found several acorns and a few pretty leaves, and then sat down in a mossy spot beside a tree to inspect my collection. As I bent down, I saw two cheerful yellow mushrooms that made my heart smile. I LOVE mushrooms! Well, I love looking at them… not so much eating them.

Anyway, as I moved to take a picture of them, I saw another mushroom out of the corner of my eye – this time it was a red one growing from the green moss.

After I had taken a picture of that one, I looked up and saw even MORE mushrooms, farther into the trees. Excitedly, I left my acorns and leaves behind and set off to follow the trail.

Oh, it was amazing – each time I came to one mushroom I could see at least one, often several more ahead of me. 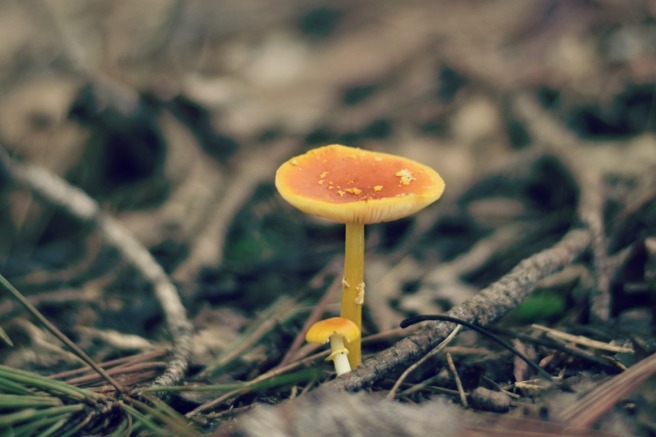 I could hardly kneel down to take a picture without kneeling on another mushroom I hadn’t noticed. In fact, if you’ll look carefully, you can find tiny, hidden mushrooms in some of these photos, like the one below, which I didn’t see until I was sorting the pictures!

Some stood all by themselves… 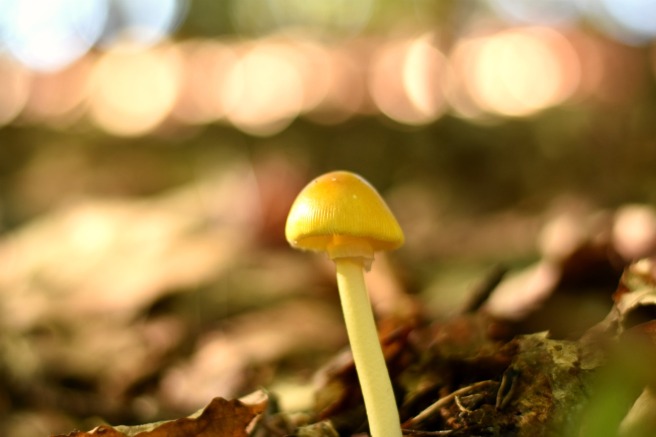 and others grew in dense clusters.

Some had strange shapes I didn’t even know existed. 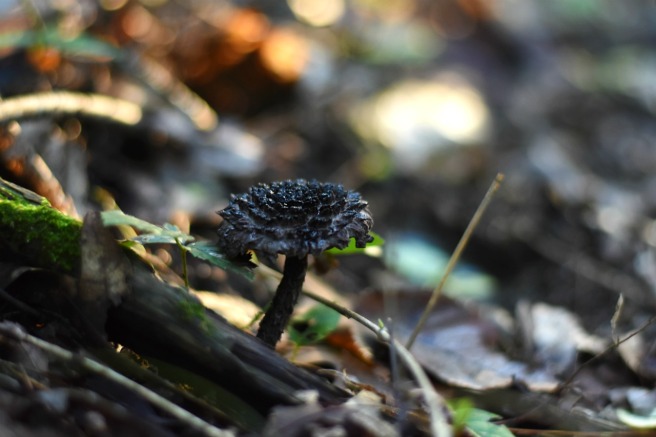 and others barely visible. 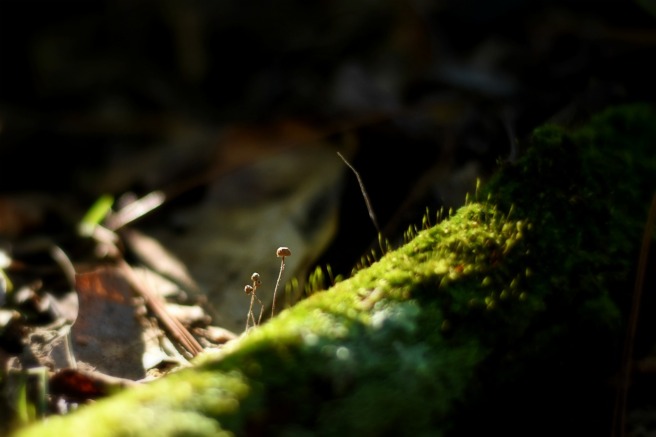 Often the big and small grew right beside each other. 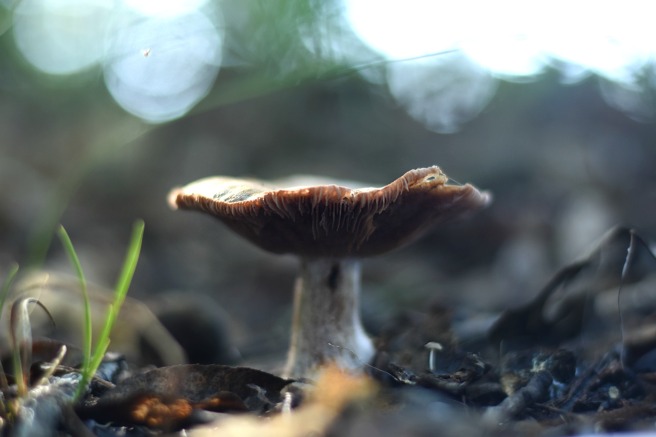 Some were sticky with slime… 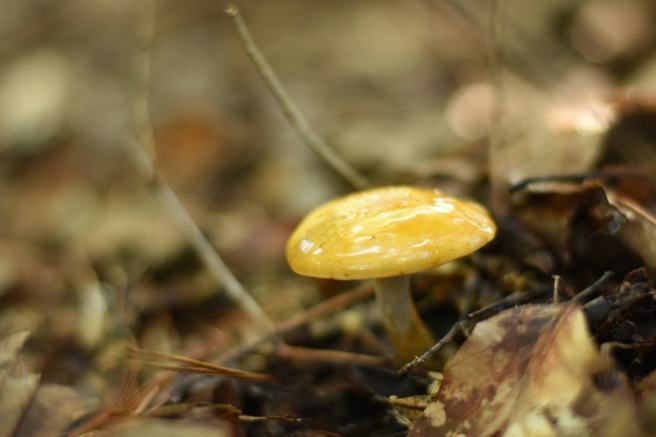 The variation took my breath away!

Later I figured that I had seen at least 60 different kinds of mushrooms in that small space of forest! Is that incredible or what?? Obviously I didn’t take or post pictures of all of them here, but just from these pictures you can see a sampling of the wide range.

I followed the mushrooms until I could see the stream shining up ahead, beyond a steep incline. 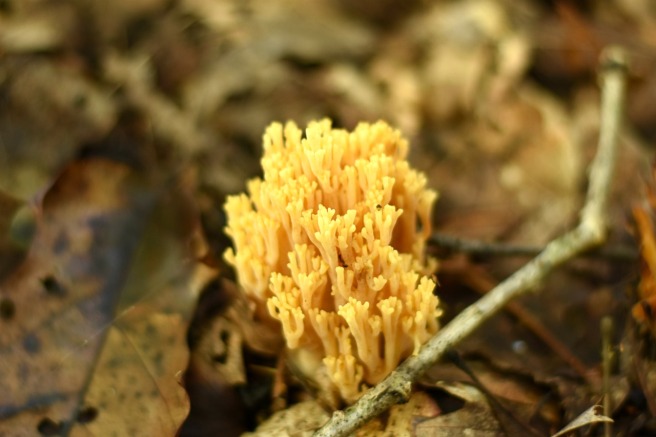 And there stood one big, bright, beautiful orange-red mushroom by itself in a little clearing. By that time my camera battery had run out, so I didn’t get a picture of it.

But somehow I felt that I had reached the end, then; even though I knew there were more mushrooms, that was too obviously a finale, and I turned back, breathless with amazement. 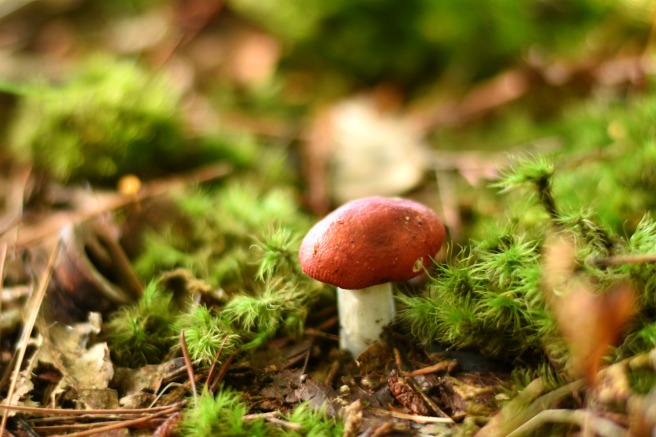 As I mentioned, my camera battery had run out before I got the end of the trail, so I decided to come back the next morning. 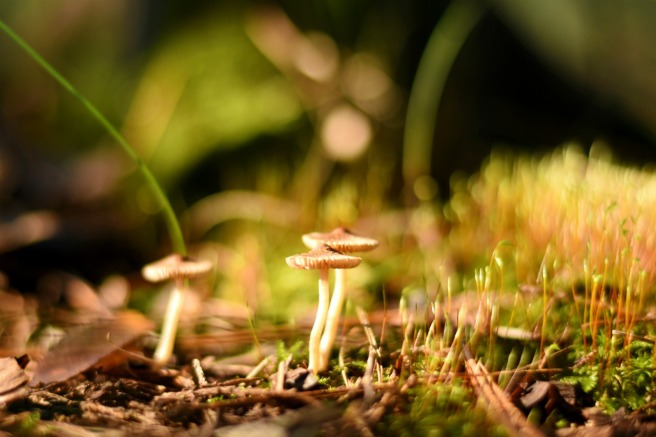 This time, I brought my macro lens, a ziploc bag of rice to prop my camera on the ground, and other equipment, because I was determined to get some appropriately beautiful pictures. 😉

It took a while for the sun to start filtering through the trees, but once it did, it was lovely! I DID get some good pictures – at least I think so!

I know this might seem like kind of a strange thing to get so excited about it, but oh my goodness, it made my day. Probably most people would have seen the first mushroom and said, “oh nice, a mushroom,” and walked off.

But God knew how much I like mushrooms and photographing them, and he led me to that little patch – it was like he grew the mushrooms just for me.

I’m sure no other human had seen it before. Mushrooms are too transient to have lasted long. Even when I came back the next day, some of the mushrooms (like the last big one) were already withering.

I just felt so LOVED, so overwhelmed that God knew something like that, even such a small thing, would touch my heart – he knew it forever and always, and he made it happen. 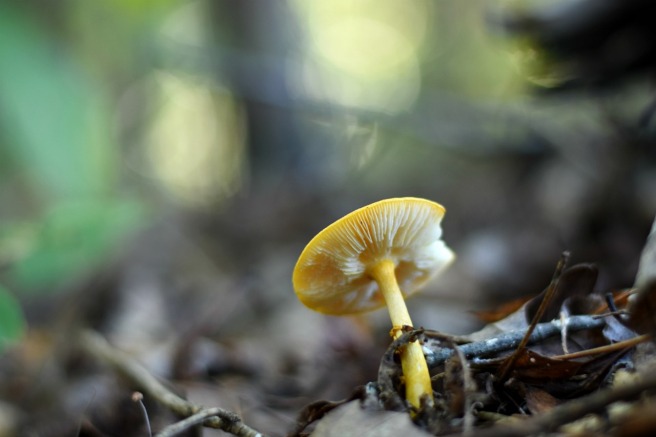 He not only died to pay for my sins and the sins of his people, but he is watching me and loving me even now, even still! And so it is for you. ❤ 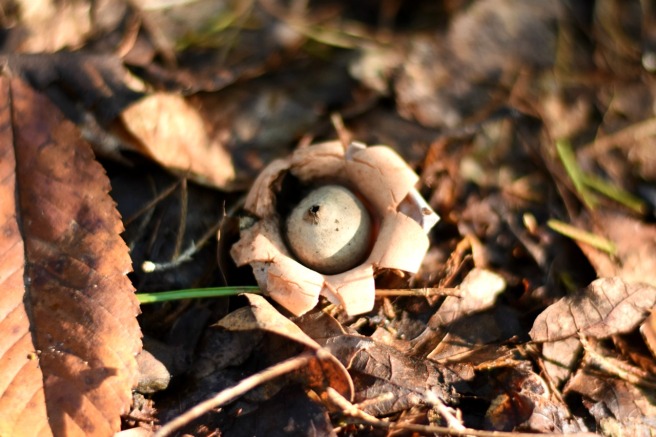 It was just so special, and I’ll never forget it. 🙂

It truly was like a magical mushroom trail, except I know it wasn’t magic – it was the Creator who made such beautiful variation for us, because he loves us and delights to bring us joy that reflects his glory.

I’m so glad I could capture some of that “enchanted forest” beauty, and I hope you enjoyed seeing it too. 🙂

Have you ever had something like this happen to you, where you just knew you were loved? Do you like mushrooms? Which mushroom was your favorite? Did you find any of the tiny hidden ones? What about the tiny gnat/flying insect, or the slug?

Thank you so much for reading, dears, and have a lovely day! ❤

76 thoughts on “The Magical Mushroom Path”

My newest ✨super tiny✨ paintings. 🥰 Once they're gone they won't be restocked, so tap the link in my profile to check these li'l guys out! Which one is your favorite?
Was inspired by @corrie_kep to make some abstract watercolors last night. It was so much fun and the results make me happy. Which piece is your favorite?
I made these two bookmarks as Christmas gifts for friends and remembered I still haven't posted them. So here you go! Two pretty skies. ❤️ Which is your favorite?
So I accidentally dropped my dried-out #himigouache and ended up with a bunch of loose paint crumbles. I decided to repurpose them by mixing them with water and painting mushrooms with the pretty burgundy color I mixed up. Kinda in love with the result. 😍